The WSJ Society Newsletter is mailed quarterly to every society member.The Newsletter has stories about society activities, Milwaukee-based and wherever members report on their activities. There are updates on members as they share them with us; and, stories about Johnson Controls, present and past. We like to publish pictures of members. Check them out at: WSJ SOCIETY NEWSLETTER. 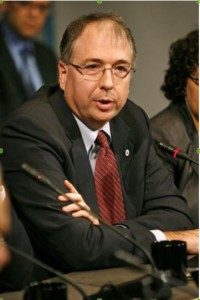 Johnson Controls Inc. chairman and CEO Stephen Roell will retire by the end of the year and will be succeeded by current vice chairman Alex Molinaroli, the company announced Wednesday. Molinaroli will become president and CEO effective October 1 and will join the company’s board at that time. He will also become chairman effective January 1st. Roell will remain chairman until his planned retirement on December 31, when he will also leave the board, Glendale-based Johnson Controls said in a news release.

“I am extremely proud of what we’ve accomplished over the past six years during my tenure,” Roell said in the release. “I’ve enjoyed my entire 32-year career with Johnson Controls and want to express my appreciation to the Johnson Controls employees and our directors for their support. It has been an honor to lead and represent the company in the community and with our shareholders.”

Under Roell, Johnson Controls has grown to record levels of revenue and employees, making $41.8 billion in fiscal 2012 and employing 170,000 people globally, the company said.

Molinaroli joined Johnson Controls’ building efficiency business in 1983. He was elected a corporate officer in 2004 and appointed vice chairman in January. He previously was president of the power solutions business.

“He brings a wealth of experience and knowledge about our businesses and the industries we serve, so I’m confident that he and the team will continue to build Johnson Controls’ global leadership positions,” Roell said.

“Our company’s standard for excellence and culture of integrity were built by great leaders who preceded me,” Molinaroli said. “Steve Roell has truly embodied all that is good about our people and culture, and he has been a great role model for all of us.”