Johnson Controls and COMSAT team up on advanced battery system 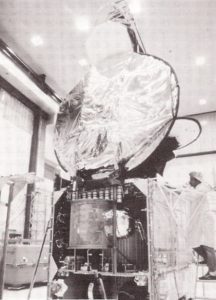 The May 9, 1984 edition of the Johnson Controls Briefing newsletter announced that the company and the Communications Satellite Corporation (COMSAT) had signed a technology licensing agreement and formed a joint venture research program to develop an advanced battery system for aerospace and other applications.

COMSAT pioneered the development of hydrogen-nickel oxide technology and had been conducting research on the battery system for twelve years at their laboratories in Clarksburg, Maryland.  Johnson Controls had been involved in the development and evaluation of the hydrogen-nickel oxide battery for two years while also conducting research into a number of other advanced battery technology systems such as zinc-bromine and zinc-nickel oxide.  At the time of the joint venture and licensing agreement, both companies were already involved in a U. S. Department of Energy advanced battery project at the Sandia National Laboratory.