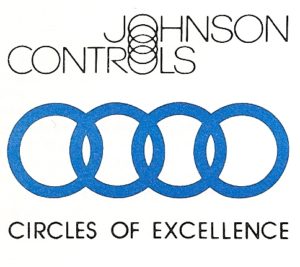 The logo for Johnson Controls’ “Circles of Excellence” program; the four circles represent the four segments of the program, while also connoting the symbol for the Olympics Games

The September 28, 1983 edition of the Johnson Controls newsletter Briefing announced the company’s “Circles of Excellence” (COE) program for employees.

The program was designed to tie in to the upcoming Summer Olympics Games in 1984 and company commercials which were to air on the ABC-TV broadcasts of the Games.

Employees were invited to participate in the program’s four segments: company awareness, community involvement, customer satisfaction, and personal wellness.  Each segment ran from four to eleven weeks, with the personal wellness phase running concurrently with the other three.  Employee participation in the activities of each part of the program earned them entries into prize sweepstakes drawings held at the end of each segment.

In the company awareness phase, employees earned sweepstakes entries by filling out questionnaires or quizzes covering the company’s history, philosophy, and policies.

Participants in the customer satisfaction phase of the program were nominated by fellow employees for their excellence in this area.

In the personal wellness phase, employees earned sweepstakes entries through activities designed to improve their well-being.

The top sweepstakes prize for employees who participated in all four COE segments was a trip to Los Angeles to see the Games while staying on a luxury cruise liner.