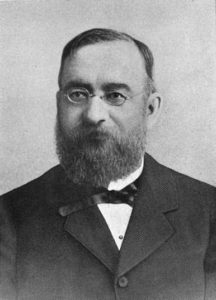 The first president of the Johnson Electric Service Company, William Plankinton, was born in Allegheny, Pennsylvania on November 7, 1844.

Shortly after his birth, his family moved to Milwaukee, where his father John began a meat-packing business that made him one of Wisconsin’s wealthiest citizens.  William went into his father’s business at an early age and, later, began his own company in South Dakota, the Western Portland Cement Company.

By 1883, Plankinton had crossed paths with college professor and inventor Warren Johnson.  Fascinated by Johnson’s inventions, Plankinton formed a business partnership, the Milwaukee Electric Manufacturing Co., with Johnson that year in order to develop and market Johnson’s inventions (including the first electric room thermostat).

Plankinton was named president of the fledgling enterprise, while Johnson was named vice president, treasurer, and general manager.  Plankinton served as company president until 1901, when Warren Johnson succeeded him as president.

In his later years, William Plankinton devoted much of his time to the management of the family estate, which was one of the largest in Wisconsin.  He also served on the boards of several institutions, including the Milwaukee Industrial Exposition Association, the Layton Art Gallery, the Milwaukee Public Library, and the Milwaukee Public Museum, and also ensured that many of those institutions acquired the Johnson System of Temperature Regulation.

William Plankinton passed away at the age of 60 in April 1905, and was remembered as one of Milwaukee’s most honored citizens.