Globe is Sears “Source of the Year”

Sears honors Johnson Controls with its “Source of the Year” award 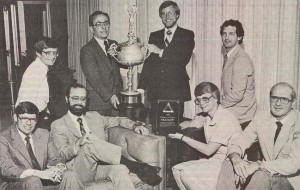 The Geneva (Illinois) Republican announced in its June 3, 1982 edition that the Globe Battery Division of Johnson Controls (today’s Power Solutions Business Unit) was named by Sears, Roebuck and Co. as the recipient of the company’s first “Source of the Year” award as the most outstanding manufacturer of Sears’ products.

Sears selected the Battery Division for this honor out of almost 11,000 merchandise sources used annually by the company as a part of its new “Partners in Progress” program, which was designed to strengthen the cooperation between the retailer and its suppliers.

The Battery Division had manufactured automotive batteries for Sears since the late 1920s (when it was known as the Globe-Union Manufacturing Company), including the DieHard battery since 1967.

According to Art Whitmire, battery purchaser for Sears, this long-term partnership between the two companies certainly contributed to the choice of the Battery Division as Sears’ most outstanding supplier.  The Battery Division was also hailed as one of 75 top manufacturers who were judged by Sears to have made the greatest contributions to the retailer’s objectives of enhanced product quality, value and innovation.

Sears presented the awards at the Geneva, Illinois battery plant on June 15, 1982, as a salute to all of the battery manufacturing locations for their efforts.