Globe-Union Listing on the NYSE

Globe-Union debuts on the “Big Board” 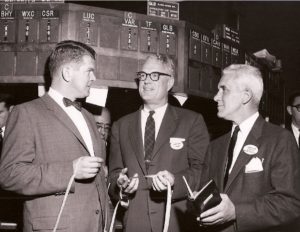 Seen here at the Globe-Union NYSE listing ceremony on October 22, 1962 are (from left to right) Globe president C. O. Wanvig, Jr., NYSE president G. Keith Funston, and broker J. Kenneth Lyden – the listing “GLB” for Globe-Union can be seen in the background

On October 22, 1962, Power Solutions predecessor Globe-Union, Inc. (which was acquired by Johnson Controls in 1978) was first listed on the New York Stock Exchange (NYSE).

That day the Exchange listed 1,411,698 shares of Globe’s common stock, which had formerly traded on the American Stock Exchange.

The switch to the NYSE, along with a special shareholder vote to increase the authorized capital stock from 1,250,000 to 2,000,000 shares, and a three-for-two split of the company’s stock on October 31, were actions designed to facilitate shareholder trading, as well as broaden the market for the company’s stock.

At the time of the NYSE listing, Globe-Union had more than 2,600 shareholders.  Cash dividends on Globe common stock had been paid without interruption beginning in 1933.  Company net sales for the fiscal year 1962 were $69,341,634.