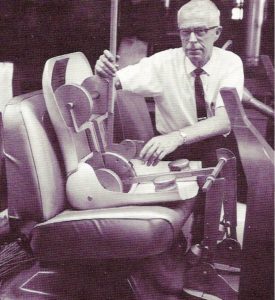 Founded in 1913 as the Hoover Steel Ball Company in Ann Arbor, Michigan, the Hoover Ball and Bearing Company was a single plant operation making precision steel balls and bearings for the first 42 years of its existence.

By 1955, however, the company began to look to mergers and acquisitions as a way to gain greater financial strength, more modern facilities, and broader management experience.  Over the next ten years, Hoover acquired several companies, most notably Universal Wire Spring, Inc. in 1960, which brought the company into the automotive seating business.  With the acquisition of Stubnitz Greene, Hoover soon became a leader in the automotive seating industry.

When it was acquired by Johnson Controls in 1985, Hoover was the largest independent manufacturer of seating for cars and light trucks in the country.  Johnson Controls spun off the auto seating business in 2016, creating an independent, publicly-traded company called Adient.