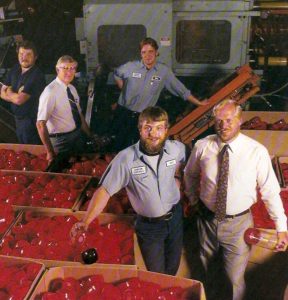 Johnson Controls was the first manufacturer in the country to have such a process, which coated the exterior of plastic containers to increase shelf life. The high-impact spray system was installed at the Nicholasville, Kentucky facility.

In 1998, the company sold its Plastic Machinery Division as well, to Cincinnati Milacron Inc. for $210 million.