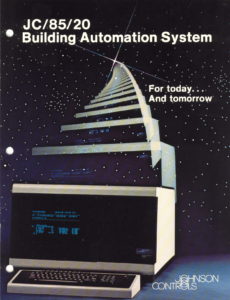 The December 17, 1982 edition of the Johnson Controls Briefing newsletter announced that the company’s new JC/85/20 computerized building automation system would be introduced at the International Air Conditioning, Heating and Refrigerating Exposition in Atlantic City the following January.

Among Johnson building automation systems of the period, the JC/85/20 was unique in that its central processing unit was engineered and manufactured by company employees.