On December 25, 1929 the opulent Fox Theatre in Atlanta opened its doors for the first time.

Described by a local newspaper as having “a picturesque and almost disturbing grandeur beyond imagination,” the Fox combined elements of Islamic and Egyptian architecture in a Moorish design – a result of the building originally having been planned as a Shriner’s temple.  The 4,678-seat auditorium, which was designed for movies and live performances, replicated an Arabian courtyard complete with a night sky of 96 embedded crystal “stars” (a third of which actually flickered) and a projection of clouds that slowly drifted across the artificial sky. 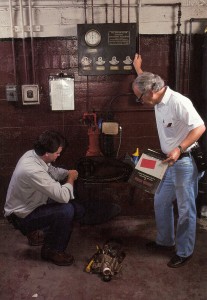 In this 1989 photo, Johnson Controls technicians examine the original Johnson Service Company control board and compressor installed in Atlanta’s Fox Theatre in 1929

By the 1970s, however, the Fox had fallen into decline.  In 1974, Southern Bell approached the Fox’s owners with an offer to buy the theatre with the intent of tearing it down and building a new headquarters on the site.  The ensuing public outcry and massive campaign to save the theatre resulted in the city refusing to issue a demolition permit; ultimately, a complicated deal was brokered that prevented the Fox’s demolition.

After it was saved from the wrecking ball, work began to restore the theatre to its former glory.  In 1977, as part of the restoration effort, Johnson Controls’ Atlanta branch worked on replacing some of the worn out elements of the theatre’s original temperature control system.  Since some of the parts needed had long since been discontinued from production, a call was put out to the other company branches for the parts.  Several branches, including Lubbock, Regina, San Francisco, Nashville, and Syracuse, responded with the necessary parts.

Today, the Fox is the last of Atlanta’s great movie palaces to survive, the others having been destroyed or turned into multiplexes.