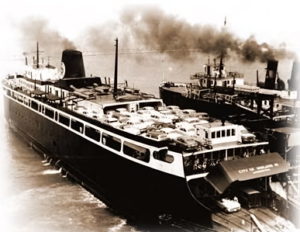 The Great Lakes ferry City of Midland in port; automobiles can be seen entering and leaving her hull

The City of Midland car ferry was launched September 18, 1940 in Manitowoc, Wisconsin.  At the time, it was the largest car ferry ever built, with a capacity of 50 automobiles, 34 loaded freight cars, and 376 passengers.  Its length was 406 feet and its width was 58 feet.

The Pere Marquette Railway Co. operated the City of Midland to travel routes across Lake Michigan from Ludington, Michigan to Milwaukee, Manitowoc, and Kewaunee, Wisconsin.  The ship was built by the Manitowoc Shipbuilding Company at a cost of $1.75 million.  Included in the cost were many amenities for her passengers, such as sixty staterooms, twelve parlors, eight dog kennels, a sixty-person capacity dining room, and a fully equipped galley featuring York refrigeration.

The City of Midland operated from 1941 until she was retired in 1988.  During that time, she carried approximately one million railroad cars and traveled 3.5 million miles.  After being mothballed for nine years, on October 1, 1997 the City of Midland was towed from Ludington harbor to Muskegon, Michigan to have her superstructure reduced as part of her conversion into a barge for transporting heavy cargo.

The City of Midland can be seen today as the Pere Marquette 41 that makes its home port in Ludington.