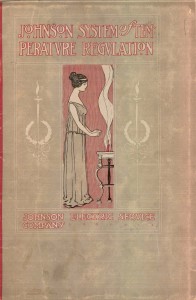 Many elite families and captains of industry in the last decade of the nineteenth century became customers of the Johnson Electric Service Company (Johnson Controls’ original name).

In that period, the new temperature control systems offered by the company were considered luxury items for residential applications.  Therefore, the names of wealthy clients such as Morgan, Astor, Pabst, and Vanderbilt dot the company contract registers of the day, as they began to specify Johnson Heat Regulating Apparatus for their mansions.

Both of those companies had been founded by his older brother George, the famed inventor and entrepreneur.  Among George’s many inventions were train air brakes, automatic railway block signals, the world’s first practical electric locomotive, and the first practical application of alternating current for electric power transmission.  The Westinghouse brand name became well-known in the twentieth century for a wide range of products, especially light bulbs and household appliances.

After the Westinghouse Electric Corporation bought CBS in 1995, the company sold off most of its remaining non-broadcast operations and changed its name to CBS Corporation.