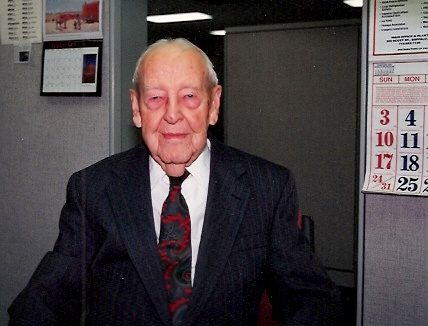 Milton Garland, shown in this 1996 photo at the age of 101, worked for Frick and, later, York for eighty years

Milton Garland, one of the United States’ oldest workers, passed away a month short of his 105th birthday on July 20, 2000.

After working his way through Worcester Polytechnic Institute in Massachusetts, Garland took a job with the Frick Company of Waynesboro, Pennsylvania for forty-seven cents an hour.

By the time Garland formally “retired” in 1967, he had risen to the position of vice president for technical services.  However, he was hired back the next day as a senior consultant.

During his tenure at Frick, Garland was responsible for a number of innovations in the field of refrigeration, which earned him more than forty patents.  In 1996, the American Society of Heating, Refrigerating and Air-Conditioning Engineers officially dubbed him “Mr. Refrigeration” for his many contributions to the industry.

When York International acquired Frick in 1987, Garland continued on in his position as a senior consultant.

In his “retirement years,” Garland created a training school for Frick engineers and wrote an engineering design manual.  He was still working twenty hours a week, examining patents for refrigeration applications and training company engineers, when he was felled by a heart attack two months before his eventual death.

When asked about the secret to his longevity, Garland would sometimes note that he avoided sauerkraut.