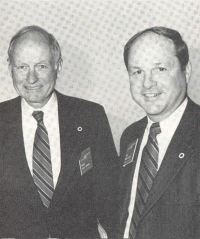 The April 2, 1985 edition of the Johnson Controls newsletter Briefing reported that Johnson Controls’ CEO and President Fred Brengel was elected chairman of the board at the board of directors meeting on March 27, 1985.

At the same meeting, Jim Keyes was elected to the board of directors and named executive vice president and chief operating officer.

Brengel started with the company in the New York branch office in 1948.  He advanced steadily through the ranks, eventually becoming president in 1967.  Brengel retired as CEO in 1988 and as chairman of the board in 1993.

Keyes began his career at Johnson Controls in 1966 as a systems analyst.  By 1985, Keyes had held the positions of company treasurer and corporate controller (1973), vice president and chief financial officer (1978), and vice president of the Controls Group (1984).  Keyes succeeded Brengel as president in 1986, CEO in 1988, and chairman of the board in 1993.  Keyes retired from the company in 2003.