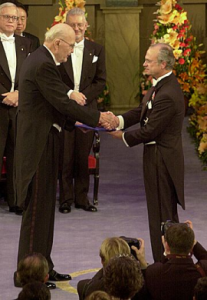 On December 10, 2000, Jack St. Clair Kilby, 77, was awarded the Nobel Prize in physics for his part in the realization of the first integrated circuit (or microchip) while he was an employee of Texas Instruments.

The microchip is the basis of modern microelectronics and can be found in everything from space probes to personal computers.  Kilby held more than sixty U. S. patents, including one filed in 1959 for a solid circuit made of germanium.

While at Texas Instruments, Kilby led the team that built the first computer that incorporated integrated circuits and, later, he co-invented the hand-held calculator and the thermal printer used in portable data terminals.

However, before joining Texas Instruments in 1958, Kilby was an employee of the Centralab Division of Globe-Union (which was acquired by Johnson Controls in 1978) in Milwaukee from 1947 to 1958.  While at Centralab, Kilby was involved in the research of one of Centralab’s main products – ceramic-base, silk-screen circuits for consumer electronic products.

In 2001, Kilby was honored by Johnson Controls at a ceremony in Milwaukee, where one of his papers written while he was with Globe-Union (entitled “Transistors – Their Manufacture and Use” – discovered in Johnson Controls’ Corporate Archives in 2001) was formally donated to the Smithsonian Institution.