Warren Tells his story on WTMJ 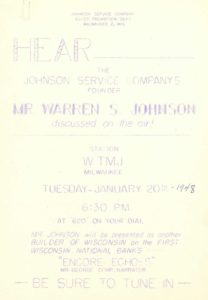 Johnson Service Company flyer promoting the WTMJ radio program “Encore Echoes,” with company founder Warren Johnson as the featured topic (click on the image to get a better view)

The audience that evening listened as program narrator George Comte, who was later enshrined in the Wisconsin Broadcaster’s Hall of Fame, related the tale of Johnson’s life from childhood through his early days as an inventor in Milwaukee.

In many ways Johnson’s path was a model of the American ideal, in which an individual rises from humble beginnings to achieve success through hard work, character, and innate talent.  The son of a homesteading farmer, Johnson was largely self-taught, although census records indicate he did receive at least some formal schooling.

In any event, as a young man he was educated enough to be appointed to positions as a school superintendent, principal, and, eventually, faculty member at the State Normal School at Whitewater, Wisconsin (known today as the University of Wisconsin – Whitewater).

Johnson was a man of many varied talents and interests, as exemplified by the courses he taught while at Whitewater: penmanship, drawing, bookkeeping, and natural science.

In 1883, at the age of 35, Johnson received his first patent (for an electric room thermostat) and began a business partnership with Milwaukee financier William Plankinton.  Two years later, the two men formed the Johnson Electric Service Company (today’s Johnson Controls) to market Johnson’s growing list of inventions, most notably in the field of indoor temperature control.  This venture ultimately made Johnson both rich and respected (if not famous) as one of the great inventors in Wisconsin history.