Working for the Railroad

The Johnson Service Company (the former name of Johnson Controls) supplied the heating control system for the building.  The shop, which cost $6 million to construct, was designed to handle all classes of maintenance and repairs from light servicing to complete heavy shop overhaul of diesel motive power units and gas-turbine electric locomotives.

Salt Lake City was selected as the site for the shop because of the city’s central and strategic location on the railroad.  The shop (which closed in 1998) featured several cranes used to move and lift the various locomotives, including a 270-ton model which was used to lift Union Pacific’s largest gas-turbine locomotive, which weighed in at 275 tons.

Today, Union Pacific remains the largest railroad network in the United States.  It directly owns and operates 31,800 miles of track in 23 states, primarily west of the Mississippi River. 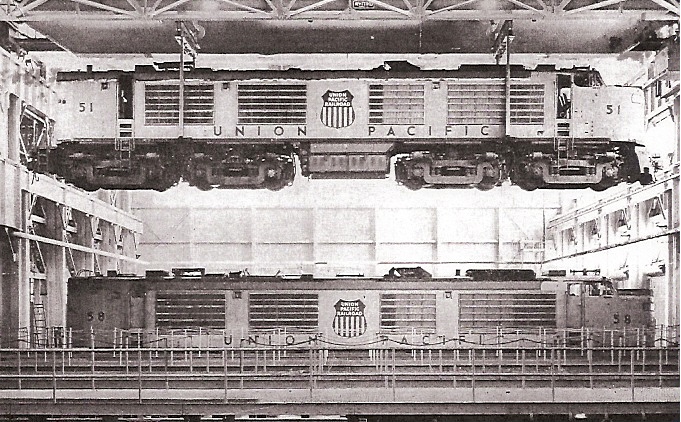 A gas turbine locomotive being moved from one track to another in the Union Pacific locomotive servicing and repair shop in Salt Lake City, Utah, in 1955