A Johnson Service Company (Johnson Controls’ former name) contract ledger from the Philadelphia branch office indicates that an installation worth $2,790 (the equivalent of about $70,201 in today’s dollars) was made at the United States Army War College in Washington, D. C. on May 31, 1905.  Included in the price of the installation were 68 thermostats and 190 radiator valves.

The Philadelphia branch office was one of the Company’s first to open – having done so in 1901.  It was located at 18th and Sansom Streets until 1928.

1901 was also the year the War College was founded by Secretary of War Elihu Root.  The purpose of the War College is to train upper-echelon military personnel and government civilians in strategic leadership responsibilities.  Among its many famous graduates are President Dwight D. Eisenhower, General George S. Patton, General Omar Bradley, and General H. Norman Schwarzkopf.

The War College was located at Washington Barracks in Washington, D. C. until 1940.  Closed during World War II, the War College reopened in 1950 at Fort Leavenworth in Kansas and moved one year later to its present location at Carlisle Barracks in Pennsylvania. 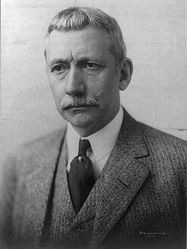