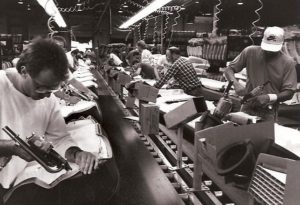 Workers at the Sycamore, Illinois just-in-time automotive seating plant in 1991

Johnson Controls’ new $9 million Sycamore, Illinois just-in-time automotive seating plant began shipping complete seats on August 11, 1987. The seats were destined for Chrysler’s Belvidere, Illinois assembly plant, which began production the same day, where they were to be installed in the New Yorker and Dodge Dynasty models.

The plant was expected to be at full production of 940 seats per day by mid-November 1987, with a total employment of 150 workers.  Almost five years to the day the Sycamore plant began operations, its workers produced their 1,000,000th seat set for Chrysler on August 8, 1992.

Among 1,650 suppliers, Johnson Controls was one of three honored by Chrysler for outstanding work associated with the Belvidere plant start-up.  Chrysler also awarded the Sycamore plant with its prestigious Pentastar Award for supplier performance three times in its first four years of operation.