A Fling with the Skateboard

Globe-Union cashes in on skateboarding mania 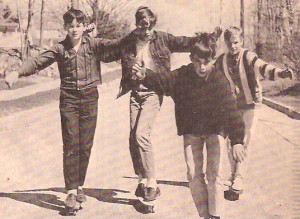 These Bennington, Vermont youths “sidewalk surf” down a street on their skateboards in 1965

The May 8, 1965 issue of the Bennington Banner reported on the new “craze” of skateboarding, which combined skill and speed in riding downhill on a board about two feet long with roller-skate type wheels.  Although medical and law enforcement authorities were already warning parents of the dangers of skateboarding, manufacturers predicted sales of over 30 million boards before that summer’s end.

Globe-Union, which was in the process of building a new battery plant in Bennington, was one of many firms capitalizing on the new fad.  Globe-Union (acquired by Johnson Controls in 1978) began manufacturing roller skates in 1931, and by 1963 was receiving requests from skateboard manufacturers for skate wheel hardware.  By 1965, Globe had become one of the nation’s major sources for the wheel units.