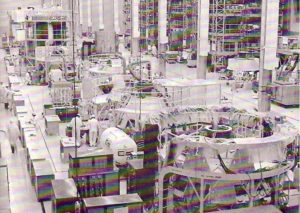 North American Rockwell’s clean room in Building 290 in Downey, California – it was here that Rockwell tested out spacecraft modules it constructed for NASA’s Apollo program

Environmental Design magazine reported that on May 29, 1969 the Johnson Service Company (as Johnson Controls was known then) was honored by NASA and NASA contractor North American Rockwell Corp. for its work on the Apollo 9 space mission.

Rockwell presented Johnson’s Systems Engineering and Construction Division (SECD) of California with a “Performance Award for Outstanding Achievement” for the company’s work at Rockwell’s Space Division in Downey, California.  It was there that Rockwell tested the spacecraft modules it made for NASA’s Apollo program in Building 290, which was actually a massive “clean room.”

The Johnson Service Company was charged with replacing the systems that delivered gaseous nitrogen, oxygen, helium, and water glycol to the various testing stations within Building 290 without interrupting the work being done there in preparation for the Apollo 9 launch.  Adding to the challenge, Johnson workers had to adhere to the strict clean room guidelines meant to protect the sensitive equipment being worked on in the room.

The Apollo 9 mission was launched on March 3, 1969 and lasted ten days in a low Earth orbit.  Its purpose was to test the Command/Service module and the Lunar module for future moon landings.