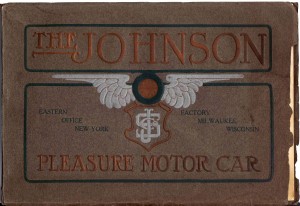 Johnson Controls’ founder Warren S. Johnson called a special meeting of the company’s board of directors on June 10, 1907.  The meeting minutes, which recorded discussions about both the company’s temperature regulation and automobile businesses, noted that Johnson spoke at length about the latter. Specifically, Johnson recommended that a new company of sufficient capital be organized to handle the automotive portion of the business which, by this time, Johnson felt had reached a production level that warranted forming a separate company.

Although a committee of board members was created to investigate the idea, a separate automobile company was never formed.  The company had been making vehicles of many types since 1901.  However, the automobile business always remained ancillary to the company’s temperature controls business.

The company’s board minutes reveal that Johnson often was frustrated with the other board members’ lack of enthusiasm for the automobile business.  Johnson would spend his final years personally promoting the company’s automobiles, especially on the U. S. West Coast.

After his death in December 1911, the new company president Harry Ellis sold off the automotive business to concentrate on the core business of temperature regulation systems.