Building for the Future in Europe 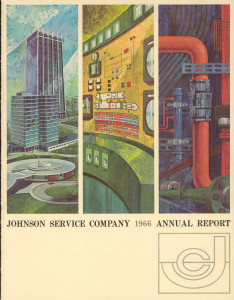 An article entitled “Instruments: Johnson Control Growth” in the April 20, 1966 issue of the Investor’s Reader predicted that 1966 should round out two decades of uninterrupted sales growth for the Johnson Service Company (Johnson Controls’ former name).

The article stated that “in the past seven years alone volume has more than doubled to the 1965 high of $92,400,000.”  However, company profits lagged due to deficit operations in Europe caused by a slow construction market and continued start-up and expansion expenses.

The company had opened subsidiaries in England, France, Belgium, Switzerland, Italy and Germany from 1960 to 1965 as part of a long-term strategic expansion of its overseas business.

Even with the European situation, Johnson Service Company President Richard J. Murphy stated that “all in all, the future for commercial controls in Europe is promising because of increasing emphasis on the upgrading of heating and air conditioning systems.”  He went on to say that the company was willing to incur the losses because “we are building for the future over there.”