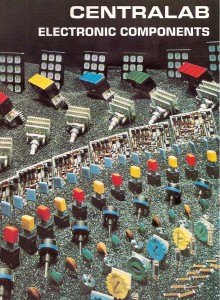 The Electronic Buyers’ News announced on April 7, 1980 that North American Philips Corporation (NAP) had completed an agreement to acquire the Centralab Division of Globe Union, a wholly-owned subsidiary of Johnson Controls, for $63 million in cash.

Centralab manufactured electronic components, principally ceramic capacitors, thick-film circuits, and electro-mechanical assemblies, with annual sales of about $100 million.  Johnson Controls decided to sell Centralab, despite its profitability, in order to focus its resources on its core businesses of batteries and building controls.

Centralab was founded in 1922 as Central Radio Laboratories to make parts for the nascent radio industry.  Three years later, Globe acquired the company, and in 1935 renamed it Centralab.

Over the years, Centralab introduced a number of innovations to the electronics industry, including ceramic fixed resistors in 1929, temperature-compensating ceramic capacitors in 1936, and a high voltage bleeder resistor assembly for color television and computers in 1971.

Perhaps Centralab’s most illustrious employee was Jack Kilby, winner of the Nobel Prize in 2000 for his invention of the monolithic integrated circuit – a. k. a. the microchip.  This invention laid the conceptual and technical foundation for the entire field of modern microelectronics, and made possible the sophisticated high-speed computer and large-capacity semiconductor memory common to today’s information age.

While employed as an engineer at Centralab from 1947 to 1958, Kilby developed ceramic-based, silk-screen circuits for consumer electronic products.  It was in 1959, one year after he left Centralab and while an employee at Texas Instruments, that Kilby conceived his breakthrough invention.