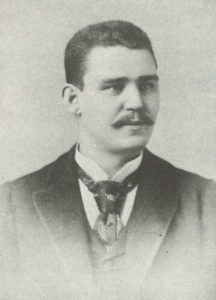 Charlie Claus as a young man

Charlie Claus, who was one of Johnson Controls’ founder Warren Johnson’s first employees, retired after 57 years with the company on December 31, 1940.

Claus was only seventeen when he joined Professor Johnson in his workshop on Milwaukee’s Grand Avenue (today’s Wisconsin Avenue) in 1885.  Claus claimed to have worked alone with the Professor at the beginning of his career, but it is unclear whether he was actually the first employee hired by Johnson.

In any event, Claus was witness to, and a participant in, many of Johnson’s early experiments and innovations in indoor temperature control.  In describing the early Johnson control systems with which he worked, Claus explained:

“Those were the days when the thermostats were really indicating instruments, instead of automatic controllers.  By means of electrical contacts, they moved enunciators back and forth, in the basement, showing the numbers of the rooms in the building which were too hot or too cold.  The janitor then operated the dampers by hand, so that more or less heated air was carried in the flue leading to the room in question.”

At retirement, Claus had been foreman of the company’s damper and valve department for many years.  On January 22, 1941, Claus was feted by his fellow workers, including company president Joseph Cutler, with a testimonial dinner in his honor.