Contribution to the Fight Against Polio

Polio had become one of the most dreaded diseases in the United States by the early twentieth century, as thousands of people were left paralyzed by its effects.  Continuing epidemics led to a so-called “Great Race” to find a vaccine.

The first vaccine for the prevention of polio was developed by Jonas Salk of the University of Pittsburgh in 1952.  After national testing on volunteers proved the vaccine to be safe and effective, its existence was announced to the world on April 12, 1955.  Eli Lilly and Company rushed mass production of the vaccine at its plant in Indianapolis, Indiana.

The Johnson Service Company (Johnson Controls’ former name), which then had a 40-year relationship with Lilly, was called upon to install temperature regulating apparatus in a variety of settings involved in the production of the vaccine.  These included incubation rooms used to grow the live polio virus, where the temperature needed to be maintained at a constant 96 degrees Fahrenheit.

After Salk’s vaccine became available, polio cases in the United States dropped by 85-90 percent in two years.  By 2006, there were only 2,000 reported cases of polio worldwide, and it had been eradicated in all but four countries. 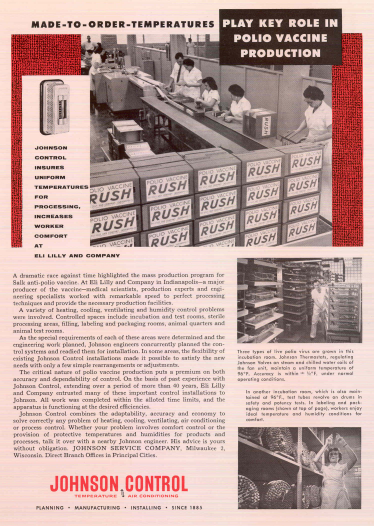 This Johnson Service Company ad from 1955 describes the company’s temperature control installations at Eli Lilly and Company, a major producer of the Salk vaccine for polio