Controls for the Tallest Building in the U.S. for less than $5,000! 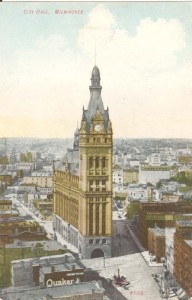 On December 4, 1894, the Johnson Electric Service Co. (Johnson Controls’ original name) contracted with the City of Milwaukee to provide a heating regulation system for the new City Hall.  The contract, at $4,972, was one of the company’s largest up until that time.

The origins of the new City Hall took form in the late 1880s.  After a fire destroyed the former City Hall, the Milwaukee Common Council authorized the sale of $1.25 million in bonds to finance the land acquisition and construction of the Flemish Renaissance style building.  The original cost of the building was $945,311 – plus an additional $71,624 for fixtures and furniture.

City Hall, at 353 feet, was the tallest building in the United States upon its completion in 1895, and remained the tallest until 1899 (and the tallest in Milwaukee until 1973).

In 1896, the Johnson Electric Service Company also received a contract for the clock in the building’s clock tower.  Designed by company founder Warren Johnson, the clock was controlled by a master clock located on the building’s third floor.  The master clock sent out pneumatic impulses through lead piping to the tower clock’s mechanism which, in turn, moved the hands on the four fifteen-foot clock faces and actuated a mechanism which struck the City Hall bell.

The original pneumatic system was replaced by an electric one in 1922.  City Hall was designated as a National Historic Landmark in 2005.