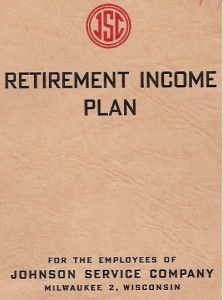 At a meeting on August 3, 1944, the Johnson Service Company’s Board of Directors adopted a Retirement Income Plan for salaried employees.

The Plan was designed to provide income after retirement as a supplement to benefits received under the 1935 Federal Social Security Act.  All salaried employees became members of the Plan as soon as they completed five years of service with the company, provided they had attained the age of thirty by that time.

The normal retirement date for the start of annuity payments was the first of the month following the 65th birthday for men, and the 60th birthday for women.  The maximum benefit was set at $350 per month.