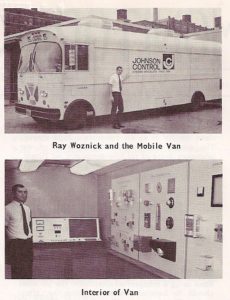 The Johnson Service Company’s Demo-Van with Johnson employee Ray Woznick in the top photo; in the bottom photo, Mr. Woznick can be seen inside the Demo-Van with the T-6000 behind him and other company products mounted on the wall. (Click on image for a larger view)

On November 30, 1970, the Johnson Service Company’s (Johnson Controls’ former name) new Demo-Van took to the road for a cross-country trip to visit all of the company’s branches in the United States.

The carpeted van was thirty feet long and eight feet wide.  It was equipped with a T-6000 control center as well as a number of other fully operational company products mounted on the walls, including fluidic controls, fire detection systems, security systems, master clock systems, and electric heat controls.

The Demo-Van was designed as both a rolling marketing exhibit and as a mobile classroom for training employees.

At each stop, customers were invited to examine the product displays, while the local branch could hold instruction sessions for as many as eight employees at a time.