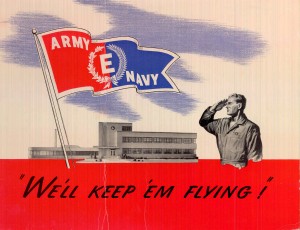 The Goshen News-Democrat reported on February 26, 1943 that the Penn Electric Switch Co., later known as Penn Controls (and acquired by Johnson Controls in 1968), would be given the Army-Navy “E” Award for their production efforts during World War II.

By 1943, the Penn plant was 95% engaged in war production.  Among the items Penn manufactured for the military were firing circuits for Navy anti-aircraft guns, periscopes for Army tanks, and “cowl flap” controls for Army Air Force fighters.

Army and Navy representatives were to arrive in Goshen, Indiana to present the award on March 5, 1943 to the 671 men and women who were employed at Penn.  The “E” flag was to fly at the Penn plant, and each employee was to receive a lapel pin.  The award ceremony was to be held in the Goshen High School auditorium, with officials from city, county, state and federal government attending.

In 1944, Globe-Union (the predecessor of today’s Power Solutions Business Unit), the Johnson Service Company (Johnson Controls’ former name), and the York Corporation were also bestowed with the “E” Award.