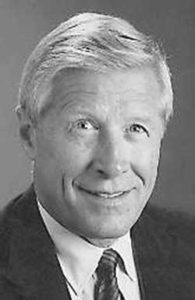 Edgar Prince, the founder of Prince Automotive of Holland, Michigan, passed away on March 2, 1995 at the age of 63.

Prince began his company in 1965 with 46 employees to repair die-cast machinery.  Though the company was moderately successful, Prince began looking for alternative business lines in the early 1970s.

Given the freedom to experiment by Prince, company engineer Kon Marcus developed a prototype for a lighted vanity mirror mounted on an automobile sun visor.  In 1972, GM purchased the visor for its Cadillac line – the beginning of what turned out to be a billion dollar automotive interior product business for Prince’s company.

Over the years, the company acquired a reputation for innovative products that were meant to “surprise and delight” the consumer.

After Prince’s passing, his widow Elsa agreed to sell the company on October 1, 1996 to Johnson Controls for $1.35 billion in cash.  At the time, Prince Automotive had annual sales of $850 million, with 4,500 employees in eight manufacturing plants.