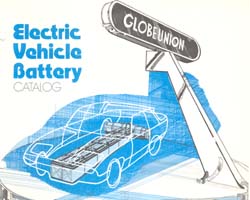 Globe-Union announced in an article from the May 17, 1978 edition of the Canby [Oregon] Herald that it had been awarded a $3.1 million sub-contract to develop and supply electric vehicle batteries.

The sub-contract was awarded by the Argonne National Laboratory, contractor to the United States Department of Energy.  The two-stage program was expected to improve the capabilities of electric vehicles through the development of a 96-volt battery system rated at 60 watt hours per kilogram, compared with about 30 watt hours of peak output with then-current batteries.

Globe’s vice president of battery engineering Vincent Halsall explained that increasing the amount of energy per unit weight was the most important factor related to improved electric vehicle performance.  Halsall added that “this system will include radical changes made within the battery that Globe-Union has been researching for a number of years.”