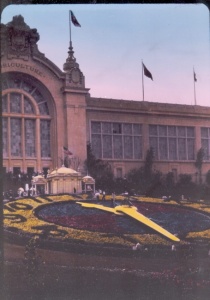 The Great Floral Clock designed and manufactured by the Johnson Service Company for the 1904 St. Louis World’s Fair

An article from the July 24, 1904 edition of the Chicago Record-Herald announced “Chinese Prince Puts Floral Curiosity at Fair Above the President.”

The article explained that Chinese Prince Pu Lun, nephew of the Empress Dowager, went back to China with two deep-rooted admirations: one of President Theodore Roosevelt, and the other of the Great Floral Clock created by the Johnson Service Company (now Johnson Controls) at the St. Louis World’s Fair.

The Prince traveled to St. Louis for the opening ceremony and liked the Fair so much that he stayed for two months.  When asked about his impression of the Clock, the Prince replied, “The clock is just the thing for a summer palace garden in China.” As for President Roosevelt, the Prince described him as “a noble, spreading tree, growing in height and dignity.”

The Great Floral Clock garnered a great deal of attention not only from the Prince, but also from Fair officials – so much so that the Johnson Service Company was awarded Grand Prize with “Compliments of the Jury.”

Warren S. Johnson, the founder of Johnson Controls, designed the Great Floral Clock, along with many other enormous, pneumatically-powered clocks, including those in the towers of the Minneapolis Court House, Philadelphia City Hall, and Milwaukee City Hall.