Although hybrid cars have recently become popular with the American driving public, Johnson Controls was involved in the development of a one-of-a-kind hybrid test automobile thirty years ago.

The journal Machine Design reported on August 11, 1983 that General Electric had successfully completed construction of a hybrid car for the U. S. Department of Energy and delivered it to the Jet Propulsion Laboratory for testing.  The hybrid had both an electric motor and a gasoline engine – the combination of which provided the fuel savings of an electric vehicle for city driving with the gasoline-engine power that permitted cross-country trips.

Johnson Controls provided the ten 12-volt batteries that powered the vehicle’s 40-hp electric motor, which could be operated separately from or in parallel with the 80-hp gasoline engine.  An on-board microcomputer determined when each engine (or both) should be engaged.  Similar to today’s hybrids, the electric motor could be recharged by the gasoline engine when it was running, by wall-plug electricity via an on-board charger, or by its regenerative braking system, which fed recharged energy to the batteries when the brakes were applied. 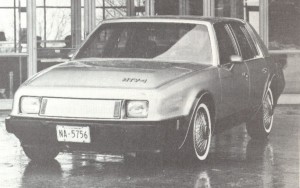