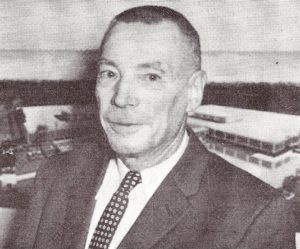 Richard Bloss shortly before he retired

Richard Bloss retired from Globe-Union (which merged with Johnson Controls in 1978) in January 1967 after nearly 50 years with the company.

Globe-Union had its beginning as the Globe Electric Company in 1911.  It was reorganized and consolidated with two other companies in 1919.  Bloss was hired on June 11, 1917 and, as the final employee hired before the reorganization to retire, he was considered to be the last of the “original” company’s employees.

Bloss sought work with Globe after a friend told him that they were hiring.  The 15-year-old Bloss started out with Globe as a timekeeper, but after two days, he decided that he would rather work in the plant, where he was put to work in the manufacture of farm light batteries.

On his last day at Globe-Union, Bloss received the congratulations of many of his fellow workers, including company president Chet Wanvig, Jr.