Globe HQ starts with a bang! 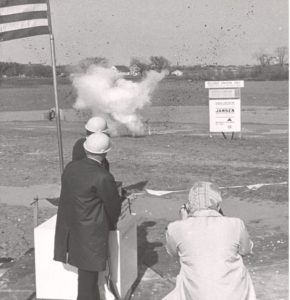 Construction of Globe-Union’s Administrative and Research Center in Glendale, Wisconsin began on October 22, 1965.

The Center had a rather unorthodox ground breaking ceremony.  Soil was loosened by a small explosive charge planted underground and detonated by energy supplied from a Globe Battery, and released through an electronic switch manufactured by Globe Union’s Centralab division. Globe President C. O. Wanvig, Jr. and Wisconsin Governor Warren Knowles simultaneously threw the switches, causing a small explosive charge and sending a fountain of mud into the air.

It wasn’t just the ground breaking of this new facility that would prove to be novel.  Charles H. Harper, the Center’s architect and designer, noted that one of the most unusual design elements of the building called for the use of elevated-type floors under which all mechanical and utility services were located.  Other unusual features included an iridescent reflecting pool containing 3,000,000 gallons of water to be used for cooling purposes as well as for visual appeal.

In addition, Wisconsin Telephone Company officials reported that equipment installed would provide the most advanced communication system in the state, providing the state’s “first touch-tone dial system in industry.”

Johnson Controls merged with Globe-Union in 1978 and moved its corporate headquarters to Globe’s headquarters building in 1980.