A headline from the January 21, 1958 edition of The Milwaukee Sentinel announced “Studie to Sell Globe-Union Batteries.” The accompanying article went on to explain that automobile manufacturer Studebaker-Packard’s parts and accessories division was to become a national distributor for Globe-Union batteries.

Globe’s “Spinning Power” battery was to be sold through Studebaker-Packard’s automobile dealerships, with the aim of reaching 1% of the replacement battery market, which was about 250,000 batteries in 1958. 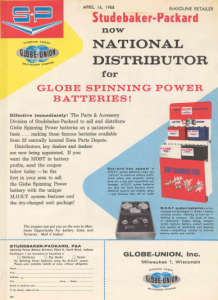 From the April 16, 1958 edition of Gasoline Retailer

Studebaker-Packard was chosen for the partnership because of the complete national distribution coverage provided by the addition of “Studie’s” 22 “zone parts depots,” together with Globe’s network of 16 battery plants.

The Studebaker-Packard Corporation was created by the purchase of the Studebaker Corporation of South Bend, Indiana by the Packard Motor Car Company of Detroit in 1954.  At the time, both firms were struggling to compete against the “Big Three” (Ford, Chrysler and GM).

While it was hoped that Packard would benefit from Studebaker’s large dealer network, and Studebaker would benefit through the additional strength that Packard’s cash position could provide, the merger ultimately proved unsuccessful.  The “Packard” brand name was discontinued in 1959.

The last Studebaker model rolled off the assembly line in 1966, as the company began to focus on its other enterprises.  Globe-Union, of course, was acquired by Johnson Controls in 1978.