Hoover makes the Fortune 500 list for the first time 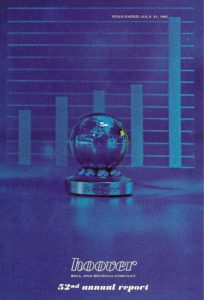 Hoover Ball and Bearing Company (later Hoover Universal) made Fortune magazine’s annual list of the top 500 largest American companies for the first time on July 15, 1966.  Hoover ranked 461st in sales (of $122 million) for the year 1965.  The Fortune ranking came as a result of Hoover’s sales figures having grown a whopping 700% in the previous ten years.

Hoover’s remarkable sales growth since 1955 could be attributed to a number of acquisitions and mergers that greatly diversified the company’s product lines.  For the first 42 years of its existence, Hoover was a single plant operation making precision steel balls and bearings.  By the 1950s, however, the company began to look to mergers and acquisitions as a way to gain greater financial strength, more modern facilities, and broader management experience.

Its first merger, in 1955, was with Universal Die Casting and Manufacturing Corporation.  Over the next ten years, Hoover acquired several other companies, most notably Universal Wire Spring Inc. in 1960 and Stubnitz Greene Corporation in 1964, which together brought the company into the automotive seating business.

In all, the acquisitions expanded Hoover’s major product lines to nineteen, and the number of its factories to 23.  By the time Johnson Controls acquired Hoover in 1985 (for its automotive seating and plastic bottle businesses), Hoover had reached number 351 in the Fortune 500 on sales of $845 million.