On April 30, 1970, the Lamar Democrat of Lamar County, Alabama, announced that the Hoover Ball and Bearing Company of Ann Arbor, Michigan planned to enter the building production field by acquiring The Sanford Company, Sanford Construction Company, Inc., and American Modular Homes Corporation, all of Vernon, Alabama.

The article explained that, because of the merger, Vernon, Alabama and Lamar County would become “one of the major centers of manufactured housing in the southeast.”

In 1981, Hoover sold its building components division to a private investor.  Hoover, which had changed its name to Hoover Universal in 1978 to better reflect its wide array of products – one of which was automobile seats – was acquired by Johnson Controls in 1985.  Hoover’s automobile seating division would become the basis for today’s Johnson Controls Automotive Experience Business Unit. 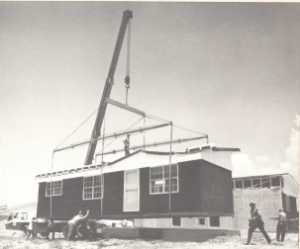