It’s Batteries for the Future! 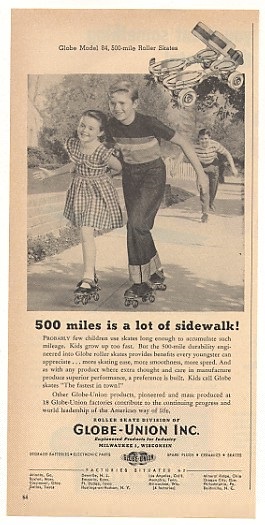 An ad for Globe-Union roller skates from 1951

On April 15, 1951, The Milwaukee Journal reported that “Roller Skate Output Skids, Due to Materials Shortages.”

According to the article, skate manufacturing at Globe-Union, Inc. (which was acquired by Johnson Controls in 1978 and was later to become today’s Power Solutions business unit) was sporadic because of a shortage of steel, leather, and plastics.  The shortage hearkened to the skate-less years of World War II, when raw materials were diverted to military production.

A. B. Cooley, roller skate division sales manager, noted that “it’s taken us five years to redevelop the roller skate pastime among children to the point where the market can be considered normal.”  Apparently, during World War II, youngsters too young to skate rarely saw older children on wheels and, understandably, didn’t arrive at the “roller skating age” with any great urge to skate.

Although roller skate production was not a major operation of Globe-Union’s, the company had become one of the top three roller skate manufacturers in the country since it began producing them in 1931.