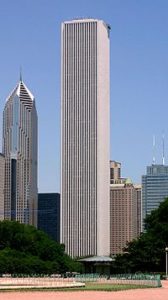 Groundbreaking began on April 6, 1970 for the construction of the Standard Oil Building in Chicago, Illinois.

When completed in 1973, the structure, at 1,136 feet, was the tallest building in Chicago (it was surpassed by the Sears [now Willis] Tower a year later), and the third tallest in the world (behind only the World Trade Center and the Empire State Building, both in New York City).

Introduced in 1972, the JC/80 system was the first computer-controlled building control system.  In the Standard Oil Building, it instantaneously monitored 1,000 sensor points as well as provided lighting control throughout the building.

The Standard Oil Building was renamed the Amoco Building in 1985 when the company changed names.  It was renamed again in 1999 as the Aon Center.