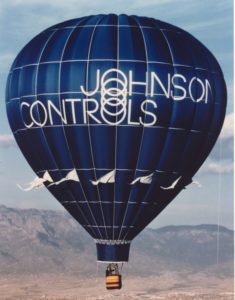 Johnson Controls purchased time for two company commercials to air during Super Bowl XX, which took place on January 26, 1986.  The ads ran during the first and second quarters of the game.

One ad featured the company’s lighting and control system for the Louisiana Superdome in New Orleans where the game was played.  Johnson Controls’ hot air balloon “Performance 1” played a prominent role in both commercials.

The company, which advertised on television for the first time during the 1984 Summer Olympics, would go on to run the ads during Super Bowl XXI in 1987.

While the commercials were aimed at potential customers for the company’s building control systems and services, they also served to heighten the public’s recognition of a company that had traditionally kept a relatively low public profile.

By the way, Super Bowl XX was won by the Chicago Bears, 46-10, over the New England Patriots.