Johnson (in) Service to Country 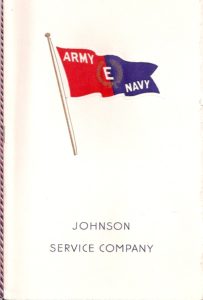 In a letter dated September 16, 1944, Secretary of the Navy James Forrestal informed J. C. Cutler, president of the Johnson Service Company (Johnson Controls’ former name), that the company had won the Army-Navy “E” Award for outstanding production of materials for the country’s military in World War II.

The award established Johnson’s leadership in American industry and its place in the top 3 1/2% among war producers.

Among the products the company produced for the war effort was a device used to detect leaks in barrage balloons, an “echo box” used to calibrate radar equipment, and the radiosonde, a device that made weather measurements at high altitudes and radioed them back to ground receivers.

Cutler accepted the Award on behalf of the company from Capt. Frederick Ceres, U. S. N. in a ceremony at the Johnson factory on September 29.  Every employee also received an Army-Navy “E” pin for their efforts.