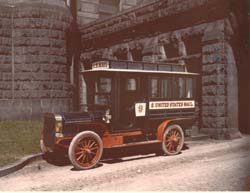 The Johnson Service Company (Johnson Controls’ former name) responded to an advertisement issued by the United States Postmaster General, dated February 7, 1911, that solicited offers to continue a motorized mail service for the U. S. Post Office in Milwaukee.

Johnson’s fleet of postal trucks had already proven itself as one of the pioneers of motorized mail delivery, having carried the mails in the Milwaukee area for four years (from 1907 to 1911).

Johnson had been making a variety of trucks and automobiles since 1901.  The mail trucks were specially designed as miniature post offices on wheels, with an upper deck that allowed room for the mail carrier to stand up at the rear of the truck and gather letters from mailboxes.  Each truck weighed 3,100 pounds and could travel at a maximum speed of 35 m. p. h.

The Johnson Service Company was awarded the contract to carry the mail for a second four-year term, beginning on July 1, 1911 and ending on June 30, 1915.  The total contract value for that four year period was $36,000.

Although Johnson discontinued its auto and truck business in 1912, the contract with the Post Office was carried out to its conclusion.