JSC at Cambridge … in church! 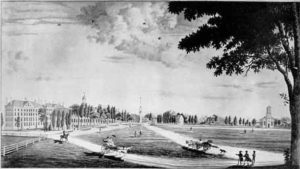 View of the Cambridge Common, circa 1808-1809, with Harvard College on the left and Christ Church on the right

The Boston Post reported on July 5, 1940 about renovations to the historic Christ Church of Cambridge, Massachusetts.  Improvements to the Church, which was founded in 1759, included removal of old furnaces and the installation of a modern heating system with Johnson Service Company controls.

During Christ Church’s long history, it had a number of historic figures associated with it.  For instance, George and Martha Washington attended services there during the Revolutionary War when Washington’s troops were billeted inside.

While a student at Harvard, future president Theodore Roosevelt taught Sunday school at the Church.  However, in 1879 Roosevelt was asked not to continue in that role as he refused to become an Episcopalian.

In April 1967, when the Reverend Martin Luther King and Dr. Benjamin Spock were denied access to a building at Harvard to hold a press conference denouncing the Vietnam War, Reverend Murray Kenney welcomed them to Christ Church.

The Church was declared a National Historic Landmark in 1960.