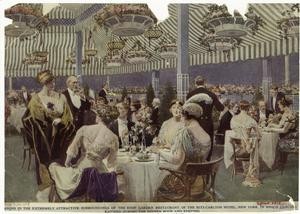 Dining in the roof garden restaurant of the Ritz-Carlton Hotel, New York, 1918

In 1910, the new hotel opened at 46th and Madison Avenue at a cost of $5 million. The hotel soon established the same reputation for luxury and extravagance that its European predecessors enjoyed.

Guests were treated to such amenities as soft rugs, gilded mirrors, glittering chandeliers, over sized bathtubs, and vials of perfume under the seats of the elevators.

The hotel played host to a seemingly endless stream of balls, cotillions, and receptions.  It also became renowned for its superb cuisine, most notably, vichyssoise, which Chef Louis Diat created in its kitchen in 1912.

However, with the economic upheavals caused by the Great Depression in the 1930s and World War II in the 1940s, the hotel lost customers and much of its former luster.  In 1951, the hotel was demolished to make way for a 25-story office building.

Today, the Ritz-Carlton Hotel Company operates 84 luxury hotels in over 20 countries as a subsidiary of Marriott International.