On October 5, 1964, it was announced that a subsidiary of the Johnson Service Company (Johnson Controls’ former name) had been formed in Belgium.

The Belgian organization, based in Auderghem (a suburb of Brussels), was Johnson’s fourth wholly-owned European branch created in as many years; the first two were formed in 1960 in London and Paris.  Geneva followed two years later, in 1962.  In addition, a manufacturing plant in Lomagna, Italy had been in operation since the previous year.

Today, Johnson Controls has over 1,400 employees in Belgium at more than twenty facilities, which are just a small part of the company’s worldwide workforce of 168,000 serving customers in 125 countries. 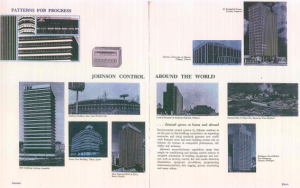