Johnson Service Company exhibits at the Heating and Ventilating Exposition 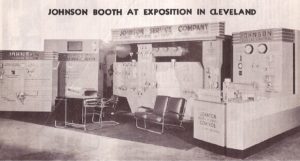 An article from the January 1940 issue of the Johnson Sales Bulletin, a Johnson Service Company (Johnson Controls’ former name) newsletter, describes the company’s “well received” exhibit booth at the Heating and Ventilating Exposition held from January 22 to 26, 1940 in Cleveland, Ohio.

The exposition was held in conjunction with the convention of the American Society of Heating and Ventilating Engineers.  Over sixty company devices were shown in the 400-square-foot display.

All of the products displayed were hooked up and operating.  The center panel featured a replica of a small central plant air conditioning system, which used flashing lights to depict seasonal changeover from heating to ventilating to cooling every few seconds. According to the article, the company’s static pressure regulator demonstration (to the immediate left of the center display) created the most interest.

The color scheme of the exhibit was blue, orange, and yellow (which, unfortunately, the black and white photo below does not do justice to), with the main captions in cut-out chrome-faced letters.