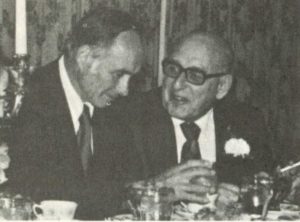 Herrick began his career with the company in the late 1930s supervising the bulletin room part time while attending college.  By 1943, he was promoted to supervisor of trade shows, a job that he continued throughout the rest of his time with the company.  Over the next 30 years he planned, coordinated, and attended hundreds of trade shows and exhibits all over the United States and Canada.  In 1946, Herrick was appointed Manager of Technical Publications and Displays and, in 1954, Manager of Advertising/Sales Promotion.

During his nearly twenty years in the latter position, company net sales rose from $31 million to $250 million per year.