McCarthy, Canadian Ambassador to the US

Canadian Ambassador to the U. S. had earlier role as Johnson legal representative

The April 6, 1921 minutes of the Johnson Temperature Regulating Company of Canada Limited shareholders meeting show that attorney Leighton Goldie McCarthy chaired the meeting, one of many that he would lead as chief legal advisor for Johnson’s Canadian subsidiary during the 1920s and 1930s.

And while McCarthy’s service to the Company’s Canadian subsidiary was long and distinguished, arguably his most significant work came after his time with the Johnson Temperature Regulating Company of Canada.  From 1941 until 1944, McCarthy served as Canada’s Ambassador to the United States.

McCarthy consulted with some of the legendary historical figures of those years, including U. S. president Franklin D. Roosevelt (seen here with McCarthy in 1941).  McCarthy died at the age of 82 in 1952. 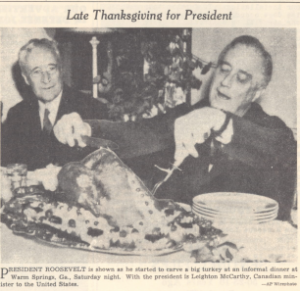